United Dao, A Blockchain-Based Protocol To Make Waves In The Crypto Scene This April

United DAO is a crypto-based protocol that just had its soft launch in early March with a huge favorable response and has announced that it will have its main launch on 1st April 2022, with upgrades to the current dApp and lots of marketing activities to grow the community, topped off by an exciting Airdrop event.

United DAO operates on the Ethereum main network at the moment for security reasons (as compared to using a Proof-of-Stake side chain), but will develop bridges in the future to these side-chains or L2 Ethereum layers to achieve cheaper gas fees and faster transaction speeds for smaller transactions.

The United DAO community on Twitter, Discord, and Telegram has been growing steadily since early 2021, and is extremely active on both the user and community managers’ end, highlighting exactly what United DAO stands for – being a DAO (Decentralized Autonomous Organizations) for the community, by the community. They also host frequent AMAs for transparency and visibility to the community (who they refer to as bees), ensuring that their concerns will always be addressed and offering support where needed.

United DAO is a next generation protocol based on their native token UTD. It aims to become a truly decentralized currency, backed by yield-generating assets, governed on the blockchain and led by industry leading experts. Together with their strategic partners, they aim to provide early-stage access to exclusive blockchain projects and private equity projects to provide growth for the treasury.

In the short term, the system will be optimized for treasury growth and wealth creation to develop the protocol. As the protocol matures and staking yields stabilize, the protocol aims to bring about optimal levels of stability and consistency in terms of treasury growth in line with their yields, to ultimately be accepted as a store of value for institutional investors.

The United DAO uses its treasury reserves to back each outstanding UTD tokens by 1 USDC, which means that the protocol would buy back and burn UTD when it trades below 1 USDC. There is no upper limit to the protocol, so 1 UTD can always trade at any amount above 1 USDC. As the protocol runs on the DAO system, this amount can be increased by DAO vote in the future, based on future analytics.

To maximize treasury inflows, the United DAO tokenomics have taken the current DeFi 2.0 mechanism and kicked it up a notch to incentivize voluntary pledging and burn mechanics, increasing the value of the UTD token over time.

Is United DAO safe to invest in?

In today’s day and age of rampant crypto scams and rug pulls, United DAO believes in establishing true credibility. The founder and advisors of United DAO are fully doxxed and easily found on LinkedIn or even a quick Google search. They also bring a wealth of experience in Finance, Blockchain and Economics to the table. Put together, this means that the risk of a rug pull, lack of accountability or responsibility due to an anonymous team would not be a concern for this project. With the team’s experience and knowledge, they would be more than capable to protect and grow the treasury as well.

Apart from its active and growing community as well as treasury, the project is currently undergoing an audit with Certik.

What’s next for United DAO 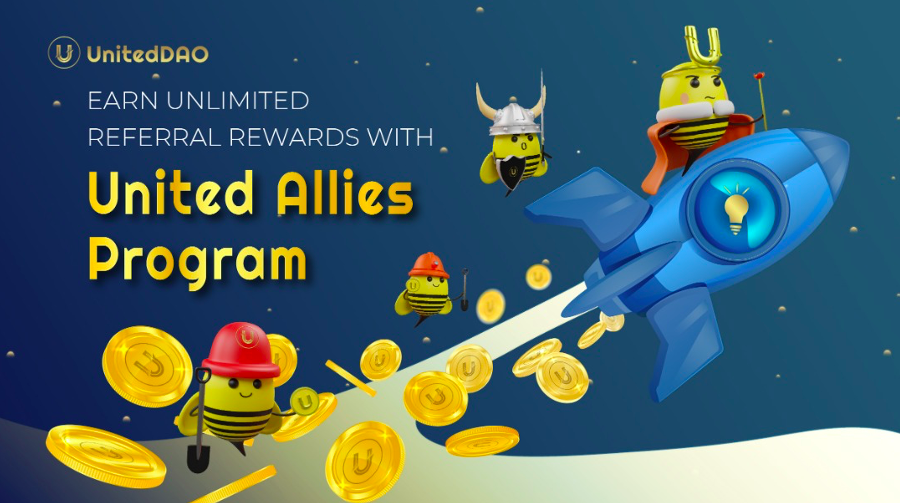 United DAO will be having its main protocol launch on 1st April, complete with UIUX upgrades and marketing campaigns. Their affiliate program, the United Allies Program will also be fully live and functional, which means that holders will be able to share their referral link with others and earn bonding commission, with no limit. This would mean a huge inflow into the treasury, and they are aiming to hit 1B in TVL (Total Value Locked) in their treasury by July.

On 15th April, they will also be holding the most exciting airdrop in DeFi space, where everyone who holds a relevant token will be eligible for the UTD airdrop. You just need to be holding any of the tokens on the Ethereum blockchain that’s in their extremely inclusive list, and link your wallet on the dApp to collect your UTD on the 15th of April.

Where is it available and how do you invest?

The $UTD token is currently available on Uniswap and the United DAO dApp and you can choose to either stake or bond your UTD.