World of Cryptoids is a recently launched sustainable p2e blockchain game. It’s a turn-based strategy card game, featuring NFTs as in-game characters, Cryptoids.They’ve been really successful with both the game and updates. They sold out all of the 6K eggs on their first public sale in less than 12 hours. That just shows how exciting and promising their game is, and how much their community is excited to build out an amazing team of Cryptoids.

On top of a successful release, they continue to work on improving their game and are delivering early updates and improvements!

World of Cryptoids is a pioneer in sP2E

They recently announced a whole free-to-play segment, where players can get up to 12 free Cryptoids and use them in game. This is truly revolutionary since not one single game has done this until now. There’s even a possibility to earn items through quests, getting the newly introduced item “Dollar” (WOCD) and cash it out, which could serve as a means of buying your own Cryptoids for yourself.

Besides having balanced and rewarding tokenomics, the game is actually fun to play and doesn’t require much time if you’re playing it just for the rewards. It’s satisfying in every aspect possible. 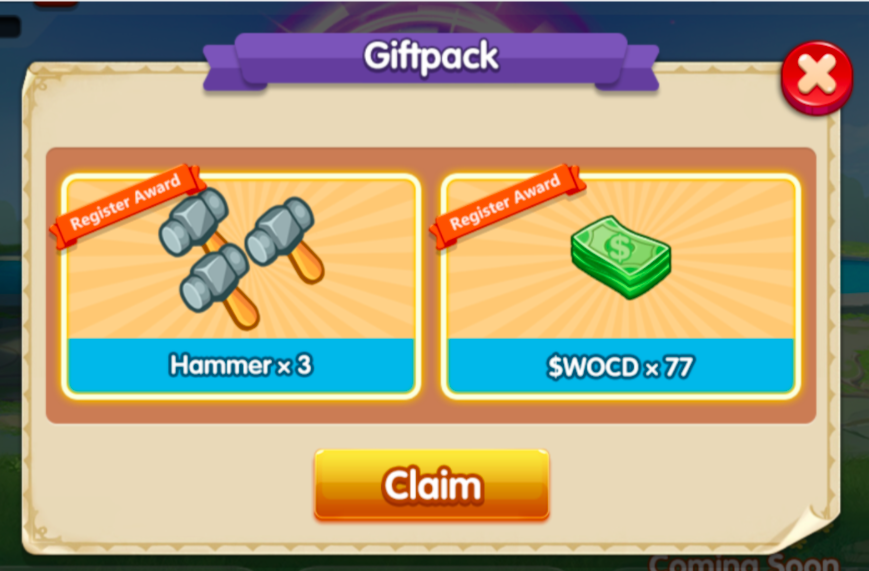 This, combined with their sustainability of p2e, as well as a prevention of NFT overpopulation, can certainly be called a breakthrough in the GameFi world.

They recently had their first IDO for their $CAC token. Since then, the price of $CAC token has significantly gone up, and people are very satisfied with their overall performance.

Since it’s the first time ever done, let’s see how they incorporated the free-to-play segment into a game like this.

You can now play World of Cryptoids completely free! You don’t have to immediately invest into it, you can try out the game, and if you feel like it’s something that you enjoy and would like to earn off of it, you can then go ahead and buy your Cryptoids without a doubt.

If you’re wondering how free-to-play will be introduced in a pay-to-play game, here’s how.

These Novices will be weaker than regular Cryptoids which is totally expected and fair, and you will be able to unlock up to 12 of them.

Each of these 12 Novices will have different skill combinations, aesthetics, classes, and races, which makes the players experience the game however they want.

This is really beneficial for their players since you don’t have to make big decisions without trying out the game, kudos to them!

They also introduced a Training mode where you can try out your Cryptoids and build the team you like the most.

Now you’re probably wondering if you’re still going to earn while playing, since it’s free-to-play. Here’s how it is going to work.

Players will be able to use these Novice Cryptoids in all game modes, the only difference is that using them won’t earn you mCGC, you will have to use at least one Cryptoids bought off of the marketplace to start earning.

So you still benefit the most by investing into your own Cryptoids, which is highly recommended.

They also introduced a beginner guide, where players can learn how to play the game if they’re new. It’s a quick, not time consuming tutorial, where you get acquainted with their lore as well!

It’s really commending what they have done for the game and the community. Everyone can enjoy experiencing World of Cryptoids in their own way.

We got a sneak peek into the story, the main characters, and the villains.

Read it for yourself, it’s going to be continued and we’re wondering what else is going to happen in the World of Cryptoids. 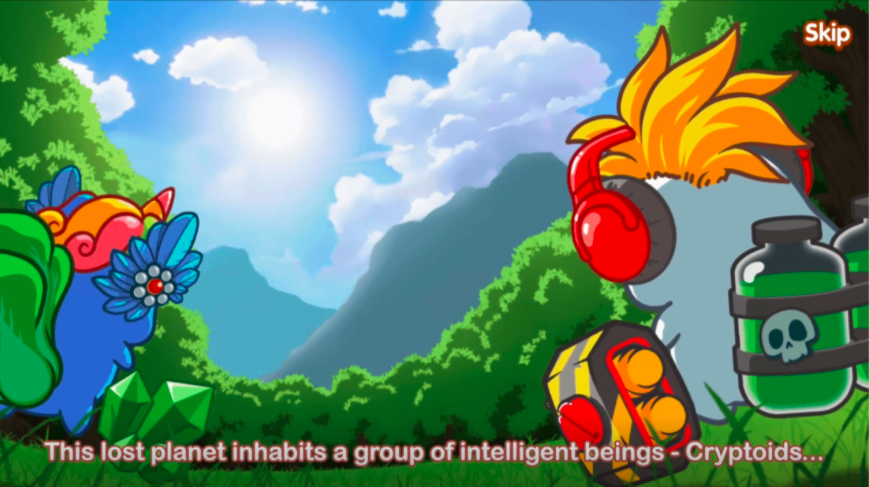 In this borderless metaverse, countless alternate worlds were created by the ever-expanding imagination of mankind.  In each corner of the metaverse, new worlds and tales are unfolding and forgotten every day, as the cycle of creation and oblivion continues.

One of those forgotten planets inhabits a group of intelligent creatures – Cryptoids. 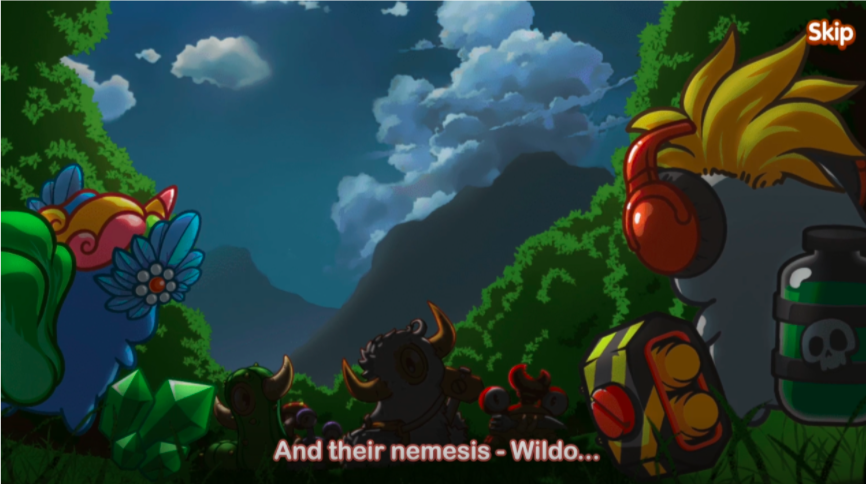 Life on this underdeveloped planet has never been easy for the Cryptoids, especially a vicious species – the Wildo also reside here. The Wildo is a group of untamed, aggressive, wild creatures who travel through this planet through a mysterious wormhole. To survive this menace, Cryptoids took up arms and gears from human civilization, sworn to protect the planet where they call home.

Prologue: Battle of the Beginning Field

The Cryptoids were led by three of their finest: Tacaro, Emo, and Lozeta, who resisted Wildos’ relentless advances. The war remained deadlocked for a long time, until MaFeida, one of the Cryptoids, betrayed his own kin to the Wildos.

MaFeida led the Wildo leader straight to the Cryptoids’ base in the Beginning Field. Tacaro, Emo, and Lozeta fend off the Wildo leader, catching his attention and forcing the Wildo to retreat.

The defected MaFeida also fled from the scene. The trio decided to find out the reason for MaFeida’s mutiny and protect the Cryptoids.

They bestowed their power and throne to Ikuyo, who became the first acting queen of the Cryptoids. 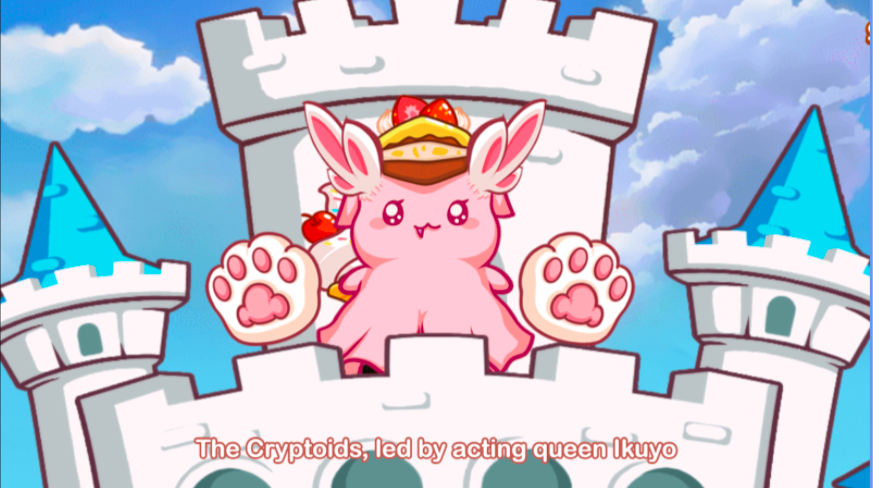 Ikuyo built a kingdom on the shambles of the final battle, Cryptodia, where the trio was respected as The Genesis.

Years passed, Cryptodia became a prosperous country and Cryptoids lived in peace. However, no one heard of The Genesis ever since. Queen Ikuyo, who is not the little girl she used to be, has decided to gather a search team of three elite Cryptoids to follow in the footsteps of The Genesis.

They organized a lot of giveaways as a celebration for a successful launch! If you’re interested in what you’re reading, make sure to follow their social media and join the Discord channel so as not to miss any events that might come in the near future!

Find World of Cryptoids and see what it is all about: